Seven minutes, that’s it. In Camp Laney’s most popular game, TRIBE HUNT, you have seven minutes to hide and seven minutes to hunt. I attended Camp Laney as a camper in the late 70s and early 80s and I still remember what it felt like during those seven minutes while the Comanches were hunting me. If they find you, you go to jail and get counted among the fallen who were also found. The team that finds the most from the opposing tribe wins the night and the very first Tribe Points of the session. As a director, those seven minutes feel just about like seven minutes should feel. As a camper, it feels like an hour. You feel your heart beating very fast, you feel bugs crawling on you because you are a few feet in the woods laying on your stomach in what is hopefully NOT poison ivy. The sweat stings your eyes as you see light from what seem like hundreds of Comanche flashlights wizzing by you. Will they see you? Will you survive until the bell rings? It is terrifying AND it is the best game we play at camp. If you ever played Tribe Hunt at Camp Laney, you definitely remember those seven minutes!! 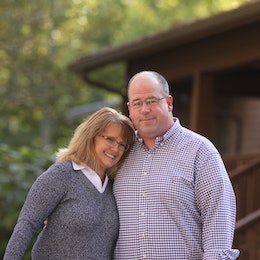 Whitney has been on staff full-time since 1994. He started coming to camp in 1977 and has never missed a summer. He and his wife Rita live in Mentone, Alabama year round.